Home Africa, Asia and Australia A Vote for a New Egypt

A Vote for a New Egypt

Just over a month after the resignation of Egypt’s President Hosni Mubarak, an autocrat who reigned for more than 30-years and was in power at the start of Egypt’s Arab Spring, Egyptians turned out at the polls in record number to vote on a referendum to amend their Constitution.

In the days leading up to the vote Egyptian people, merchants at the famed Khan El Khalili Bazaar, resort owners, educators and people from all lifestyles freely shared, possibly for the first time, their thoughts on the upcoming vote. These people had a real interest in the future of their country. Those who are literate read the referendum and many saw to it that the illiterate were informed. 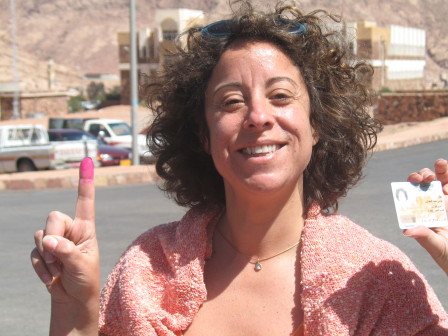 Citizens weren’t merely going to the polls because it was their right. They had that right for the past three decades but this was different. These people were hopeful that a fair polling of the people would take place, something they had not experienced under Mubarak’s rule.

On 19 March 2011, 40-year-old Hanan El-Madaawy entered the police station in St. Catherine to cast her ballot for the first time as an Egyptian. This and the events leading up to that day have been history in the making. Hope abounds. On that day 80 million people moved toward democracy and a chance to live a life free of the shackles of emergency law. It was a new day.