As the events of 25 January 2011, the start of Egypt’s Revolution unfolded I sat tethered to my computer absorbing every utterance on Al Jazeera English, watching the tweets roll in on Twitter, my television tuned to CNN, taking in any source of media available to me. My interest in the affairs was multifaceted: concern for my friend living in Cairo, I was holding an airline ticket to Egypt for 30 January and politically the events of the day and weeks that followed were changing history.

As we now know, 18-days after the start of the Revolution, the 30-year reign of President Hosni Mubarak ended. Despite warnings from the US Department of State for American Citizens to postpone any non-essential travel to Egypt, my friend and I decided it was safe to reschedule my trip. As I boarded my plane in Philadelphia, I did not know if I might be walking into a political hornet’s nest on the other side of the world. Only a month had passed since the fall of Mubarak. Protests continued in Tahrir Square on a smaller scale.  I would be landing in a country without an organized government.
Now 4-months later, I can tell you that I have no regrets about visiting Egypt during the Revolution. I say during because many naively think that it is over. Despite the belief that the Revolution is in the past, go to any online travel forum and read the questions people are posting about Egypt. Inevitably, you will find people asking questions about safety.

My feelings are that if it was safe a month after the Egyptian government tumbled, it is safe now. I never thought I was in any danger. I might even say I felt safer than I would in many American cities. If you still have concerns about safety, there are companies that provide travel, medical and security assistance for a fee. On-Call International, evacuated more than 300 people, including students, business people, and travelers from various locations around Egypt during the unrest earlier this year. So, now that we have gotten the safety concerns quelled, let’s look at why now is a great time to visit Egypt. Of course, there are the obvious reasons, the things that have always drawn tourists and always will; the mystique of the pyramids, the Sphinx, the Nile, the architecture, and the ancient and varied history that abounds. I think we can count on those things being around long into the future. However, history is happening now. You only have one chance to experience this moment in Egypt’s story.

Let me give you an idea of what you can look forward to by visiting now. After a short drive off the main road, we cleared the fertile agricultural vegetation. The immense desert, the Step Pyramid, and surrounding complex at Saqqara appeared before us. Conspicuously missing were the tour buses. Not a one in sight. According to Jim, my guide, the lot at the visitor center would normally be packed. That day I had the architectural wonders to myself. There was no waiting to enter the pyramids and no hurry to get out and allow others to visit. From there we traveled to Dahshur, home of the Bent Pyramid, the North (Red) Pyramid, and the Black Pyramid where again we were alone with the exception of a tiny group of Canadian tourists and the tourism police. And although the Bent Pyramid is not open to the public we were allowed to go up and take a peek into the tomb. I guess that is one of the benefits of being the only tourist.

After Jim and I finished at the pyramids, we headed for the famed Khan El Khalili Bazaar. By this time it was late in the day. When we arrived, the walkways that would normally be bustling with people were vacant with exception of those working at the market, some locals, and those making their way to the evening “call to prayer.” Owners stood outside their souks chatting with one another and waiting for the occasional tourist. All eager to show off their wares. 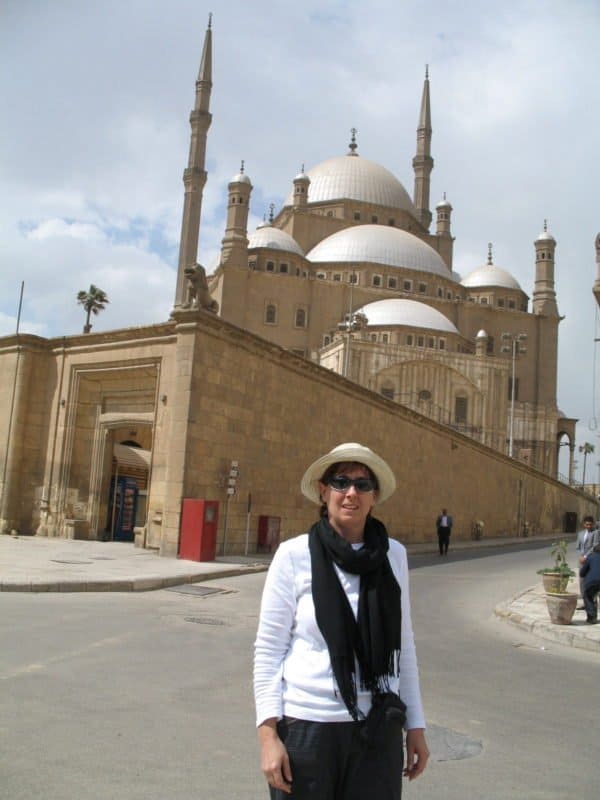 However, this is where I got an opportunity to talk to people about what was happening politically. It was amazing to talk with the Egyptian people about the upcoming vote. People spoke openly about the future of their country, the protests that occurred over the past several weeks, and the political situation that precipitated the events of 25 January. The country was days away from what Egyptians hoped would be the first untainted vote in many decades; a referendum to amend the nation’s Constitution. When I mentioned the upcoming vote to one merchant, he hurried off to retrieve a printout of the proposed changes. Written in Arabic, I could not read it but he was happy to tell me what it said and informed me that I could get an English version from the Internet. As we stood among his baubles, he openly admitted he planned to cast his vote against the suggested modifications. He went on to explain that a vote against the proposed changes meant that the entire Constitution would get tossed out in favor of a new document.

The shopkeeper’s disclosure that he planned to vote against the amended document would have been unlikely just weeks earlier. Such a statement under the previous regime might have resulted in him being forcibly kept from the polling place. Most of the people I spoke with planned to vote the same way as the merchant (but we now know the majority voted the opposite). They expressed the same concerns over an amended Constitution. They all felt it did not do enough. Their apprehension was that the amendment left gaps that would allow for Mubarak’s sons or his cronies to attain power resulting in what I have heard called “Mubarakism without Mubarak.”

On 19 March 2011, I accompanied my friend Hanan to the polling place in St. Catherine. She was there to cast her ballot for the first time as an Egyptian. Because I am American, I was not allowed to enter the police station, which on this day doubled as a voting site. As I waited, the police officers made small talk with me. A short time later Hanan emerged, smiling. She clutched her National Identification in her left hand and held up her index finger of her right hand, now dyed magenta to indicate she had voted. It was a proud moment for her and I was proud of her. I can only imagine how that moment felt to her as an Egyptian. But for me, it was one of the most inspiring moments of my life. 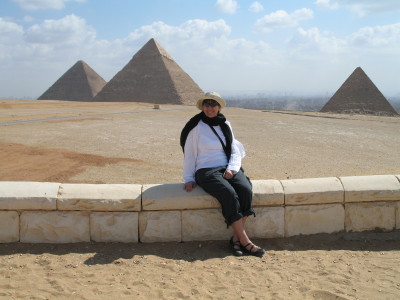 The day that I visited the Sphinx and the Great Pyramids at Giza which were only slightly less deserted than the outlying ones, our driver had a placard on the dash of the van that  looked like an Egyptian license plate but read ” January 25.” (You see these and the Egyptian flag everywhere now.) I asked if I could take a picture of it. He asked, “You know what it means?” I replied, “Oh, yes!” He beamed at the idea that I knew of the Revolution. His pride in his country and his hope for the future were evident in his smile. No one can say for sure when the travel industry will recover. But many expect tourism remain down at least through the elections. The Parliamentary elections are now scheduled for November and the Presidential election in early 2012. While the Revolution provided a unique experience for me and promises the same for others who dare to visit during these uncertain times, it has severely damaged the tourist trade that so many Egyptians count on to put food on their tables.

Originally posted to Gypsytales01.wordpress.com on July, 15, 2011. Written by Susan Decoteau-Ferrier