Summertime in the country offers a bounty of farm fresh produce simply not found at your grocer or even your local Whole Foods store. June 19, 2018, ushered the first day of Milburn Orchards’  u-pick cherry season.

**Edited for 2018. Edits reflect links to this seasons prices and entertainment and more. Note: While the location of the orchard has changed since this was originally written, the spirit of the adventure remains the same. 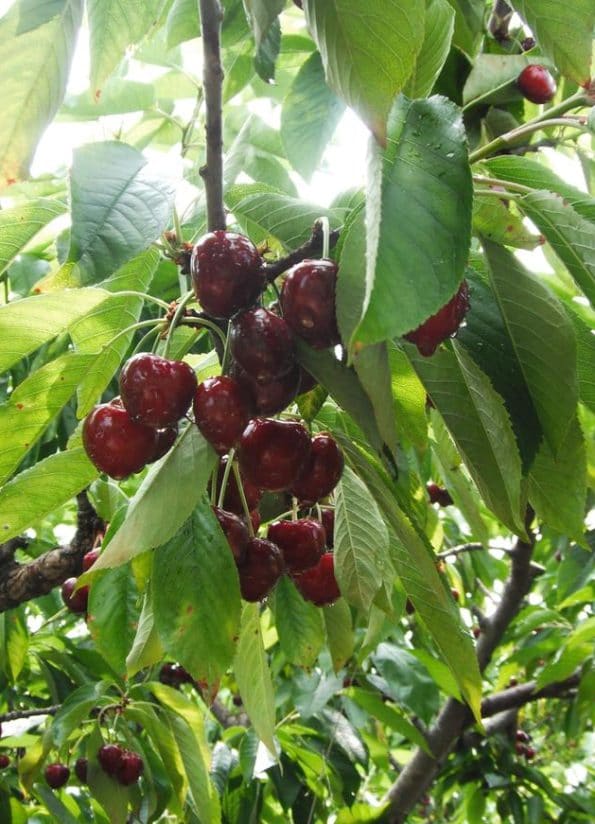 Living not far from there, I decided to make the journey despite rain clouds looming in the distance. They appeared to hang directly over my destination. As I drove, I saw a random lightning bolt dart from the dark sky, now and then. I hoped that the storm was further away than it appeared or would pass by the time I arrived. After turning off the main road (or at least what would be consider such in these parts) I saw that the clouds were indeed precisely where I was headed.

But once I left the main thoroughfare those ominous skies seemed unimportant. I was enjoying the picturesque landscape of the northeastern portion of Cecil County. Sloping hills and farmers’ fields fashioned miles of patchwork farmland. Dotting the countryside were horse stables, stone farmhouses, and silos. A stream meandered through the terrain and split rail fences divided plots of land. Even if I were to return home without cherries, it would have been worth the trip. 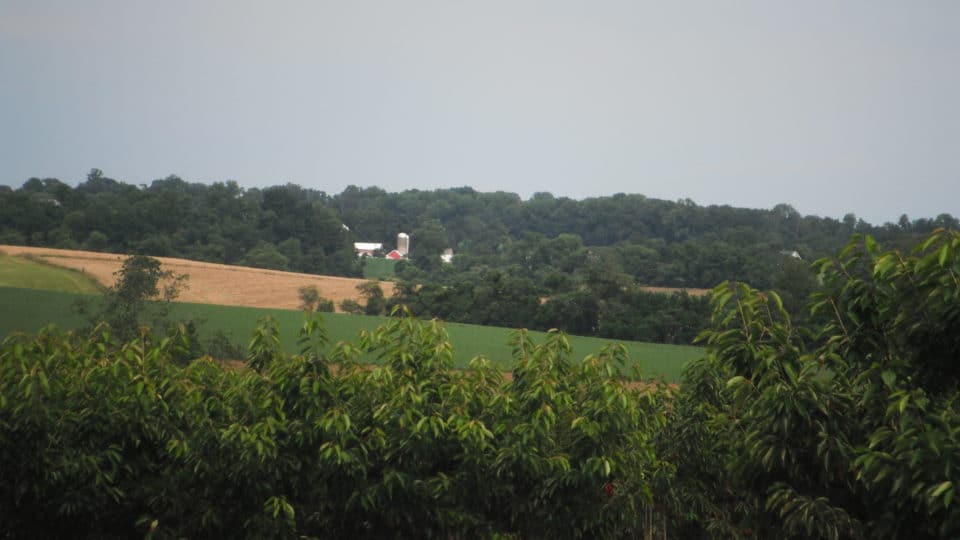 Finally, arriving at my destination, I pulled onto an unpaved road. A short distance in began the rows of cherry trees. A bit further, a clearing for parking and a tent protecting a makeshift checkout counter and employees from the elements.

I parked. Before I could even exit my car, the skies opened up. People hidden among the trees on my drive in, came scurrying from the orchard seeking shelter in their vehicles. I decided to wait out the storm. The rain came down steady for at least 15-minutes.

Once the clouds cleared, the cherry-picking could commence. I picked up a basket from one of the employees. He explained that the rows with the pink ribbon were sweet Bing cherries and the white ribbons indicated white cherries (it was all quite logical really). He said to look for the darkest, almost black Bing cherries as they are the ripest and sweetest fruit. 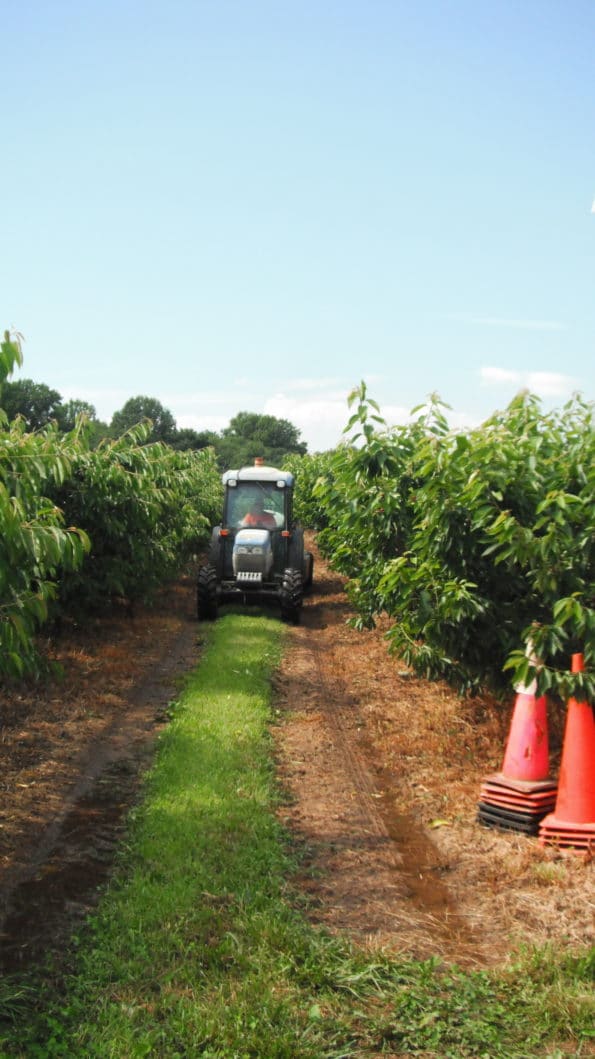 I chose an aisle and started picking. As I plucked the dark red orbs, the sun shined through the tree branches and leaves. The rain droplets clung to the fruit, which glistened in the rays. It was really quite pretty and sure made the berries tempting.

After loading my basket (which holds roughly 10-lbs) with both white and Bing cherries I took my bounty to the register to pay. Interested in learning a bit more about Milburn’s operation, I started asking questions.

One of the first things I learned was the girl who rung up my order was Miss Cecil County, Farm Bureau Division 2010, Zoe Milburn. One of the young men mentioned her title I think mostly to embarrass her a bit. When I embarked on this adventure, I had no idea that I would find myself in the presence of a local celebrity. Additionally, Zoe is the orchard’s co-owner Nathan Milburn’s daughter. 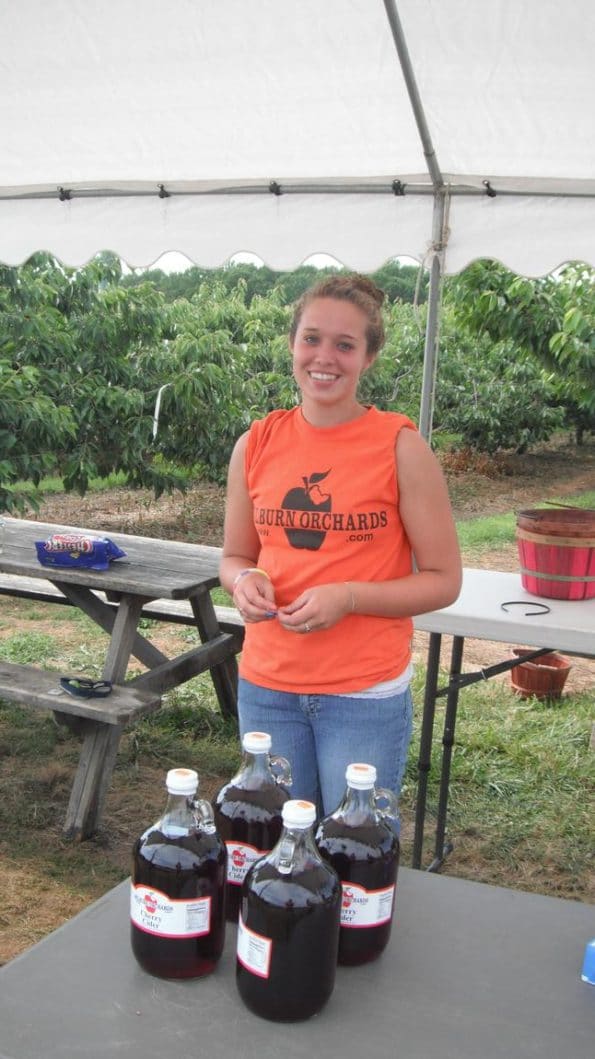 Learning about Cherries at Milburn Orchard

Nathan took some time to school me in cherry harvesting and cultivation.

Although I had picked white cherries, unlike the Bing cherries, I was not sure how to determine which ones were the ripest. Nathan and Zoe said to look for the ones that are a peach color between the white and the reddish areas. “The more blush, the better,” says Nathan.

Around this time, I began hearing the hum of farm equipment in the distance. Nathan told me that the sound, which was now closer and sounded like more of a “Whoosh,” was coming from giant dryers. The apparatus was being towed behind a tractor and was blowing warm air onto the trees. Nathan explained that the fruit needs to be dried after it rains. If water sits on the berries it will cause them to “popcorn” (they turn in on themselves) and destroy the crop. Continuing, Nathan tells me cherries are extremely delicate which is why most growers do not even get involved with them. 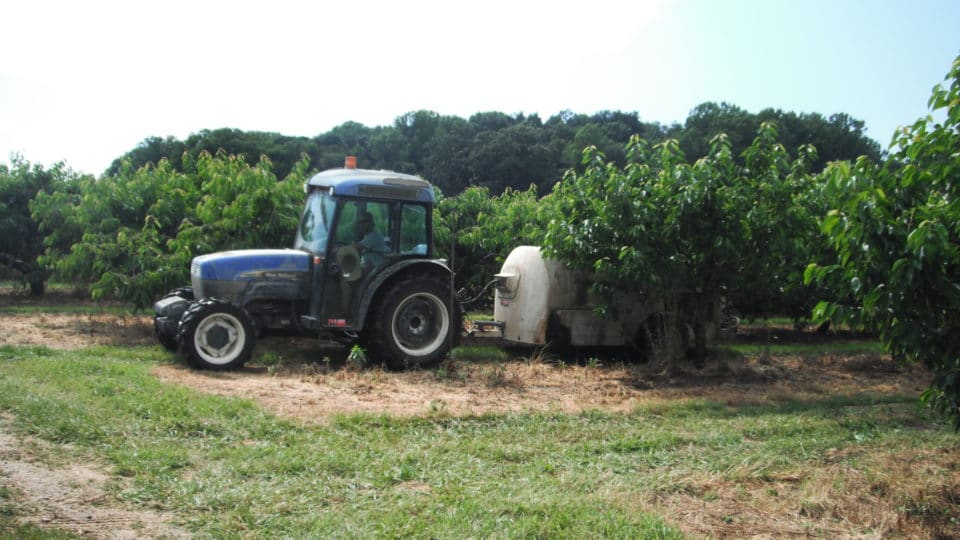 Nathan claims that Milburn Orchards is experiencing the best cherry crop they have had in 20-years. But because they are so, delicate, he is keenly aware that the bounty could be gone tomorrow. He says, “A season could last days or weeks.” For this reason, it is advisable to call the orchard before making the trip. That is unless you will be satisfied with possibly only getting to take in the scenery.

So, on a day that I expected to simply go pick some cherries and support a local business, I traveled some breathtakingly scenic back roads. My trips intended purpose was threatened by thunderstorms. I met the reigning Miss Cecil County, Farm Bureau Division. Finally, I learned a bit about the cherry growing business and met some fine people.

Note: Cherries are not Milburn Orchards only u-pick crop. They also offer, blueberries, grapes, blackberries and red raspberries as well as apples. For a full list of events and u-pick information, visit http://www.milburnorchards.com 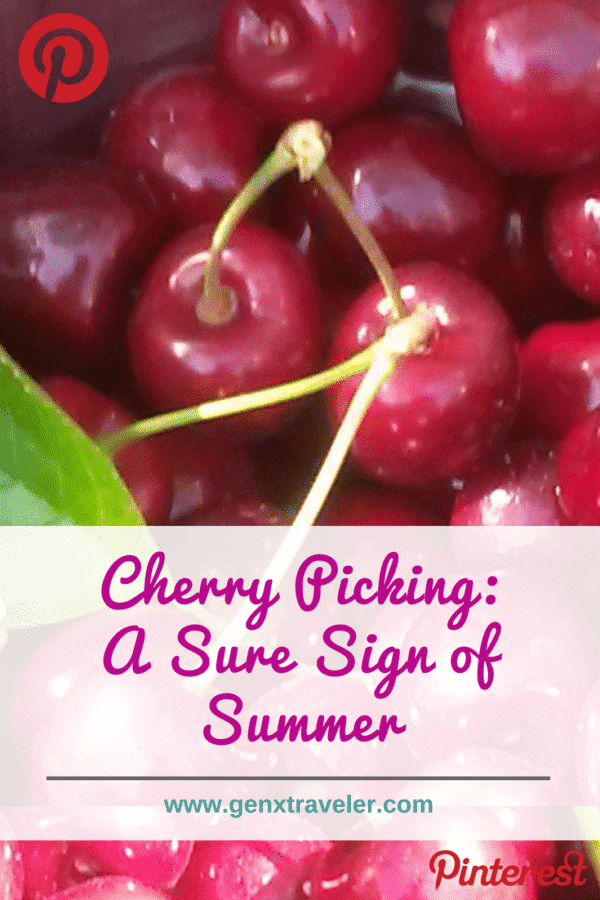 State Fair or County Fair? You Be the Judge.