I didn’t want to visit Rome until I did

When my husband, Bill, suggested we spend a few days in Rome, Italy before we embark on our recent Mediterranean cruise I must admit I felt lukewarm about the prospect. Rome or even Italy for that matter seemed a bit cliche. It certainly did not head up my list of must-see places. Even after doing my research, as I always do before visiting a new locale, I still wasn’t overly excited. However, after spending three days there my opinion drastically changed. I would now say that it should be on everyone’s bucket list. And having been back a second time I’ve decided it is a place I could visit again and again. 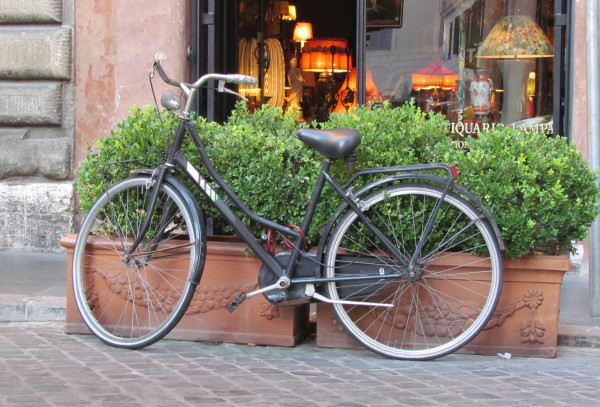 Why? Because Rome has it all: art, architecture, fashion, food, history, romance, and religion. Unless you are an extreme adrenaline junkie who always needs a fix (and even then you could get on a Vespa and weave in and out of traffic for a thrill) you are sure to find something of interest in this city. Rome attracts throngs of tourists from all over the globe for a reason. 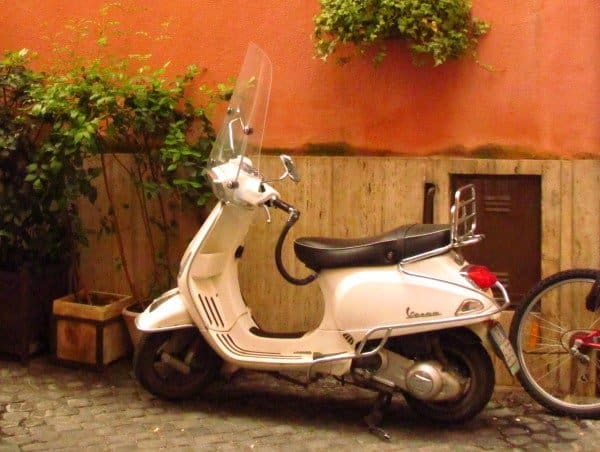 The Vatican City, St. Peter’s Basilica and the Vatican Museum

Rome is home to the Vatican City (technically, a State within a State), arguably the most religious destination on earth for Catholics. But it is home to an amazing collection of art and artifacts. Not all works are Christian. There are Egyptian pieces as well as relics that relate to pagan religions. You will find some modern art, much of which has been donated. 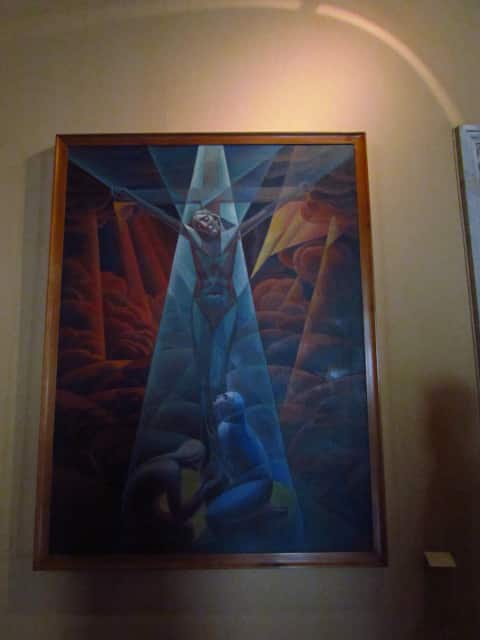 Forget the many galleries of the Vatican Museum, the building itself is a work of art with its many fresco adorned domes, arches and ornate corridors, and mosaic floors. And of course, there is the Sistine Chapel. Words and photos cannot do it justice so I won’t try. (I’ll do what I can with photos but pictures are not allowed in the Sistine Chapel.)

And of course, there is Saint Peter’s Basilica which could possibly be the most ornate building I have ever visited. While the Vatican Museum, in my opinion, is as much, or more about art as it is Religion, the Basilica, despite its ornamental elements is steeped more in religious tradition. This is where the bodies of past Popes elevated to the status of Saints are entombed and on display. The Cardinals hold up here until a new Pontiff is chosen after a Pope’s death. And Mass is held by the Holy Father on the square outside St. Peter’s on Wednesdays and Sundays.

The Coliseum and the Forum

Of course, Rome is known for its ancient history. It is home to some of the most spectacular and important ruins of early civilization including the remains of the Coliseum and the Roman Forum. These are of course major attractions. 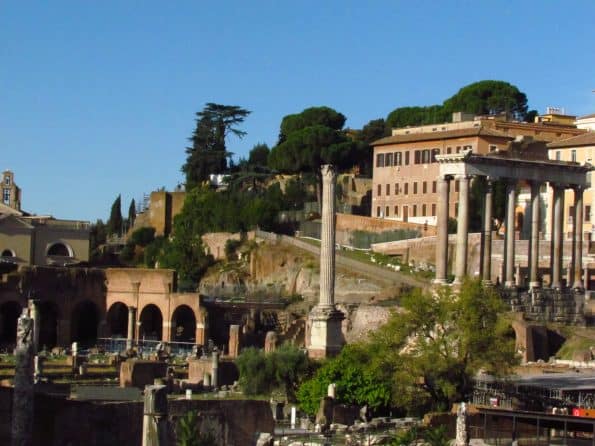 On the day of our tour, we arrived early in the morning, a nice time to visit as it was not yet mobbed by tourists. Our tour began at the Forum. We visited the remains of the Senate building and walked portions of the roads once traversed by Roman chariots. Our guide talked about the role of the Vestal Virgins as confidants to the Emperors. 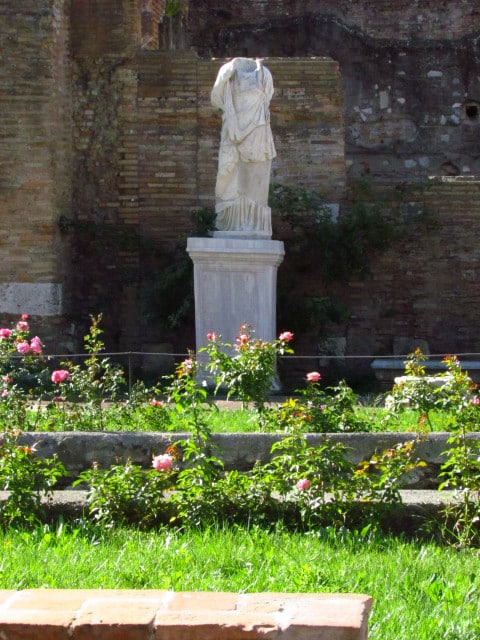 By the time we made our way to the Coliseum, the masses had arrived. The Coliseum which is more immense than I imagined was wall-to-wall people but after all, it was built to accommodate large groups. It is estimated that in seated approximately 50,000 people. 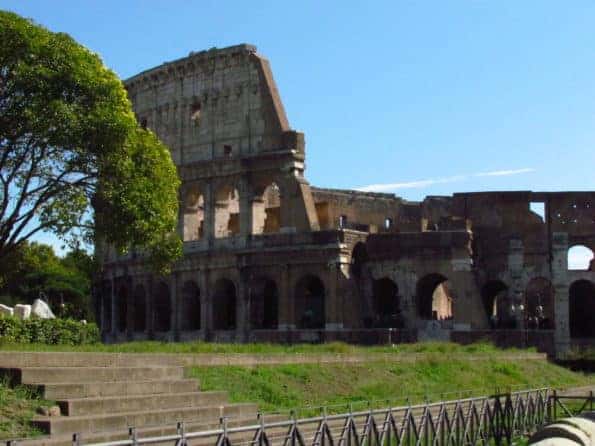 The vastness of the Coliseum makes it difficult to describe. The Romans employed architectural element still in use today, such as arches which are known to strengthen a structure and probably has contributed to the building’s longevity.  Many modern arenas use design elements found in this building.

The Coliseum served as an important part of Roman society. It of course was host to gladiator fights but also reenactments of great battles. Where a person was seated for these events was indicative of their social status, with Emperors and the Vestal Virgins having the premium seats and those on the upper levels being commoners.

Touring the Forum and Coliseum with a guide brings a better understanding of civilization at the time. It also provides a view into the politics, religion, and culture of the day. It is interesting that so much of modern life is rooted in ancient Roman civilization.

An ancient and modern city rolled into one

However, Rome is not all about ancient history and religious tradition.  The city has a surprisingly modern feel, especially when you think that 16thcentury buildings are considered modern. Contemporary skyscrapers do not exist, yet Rome has a surprisingly metropolitan vibe. 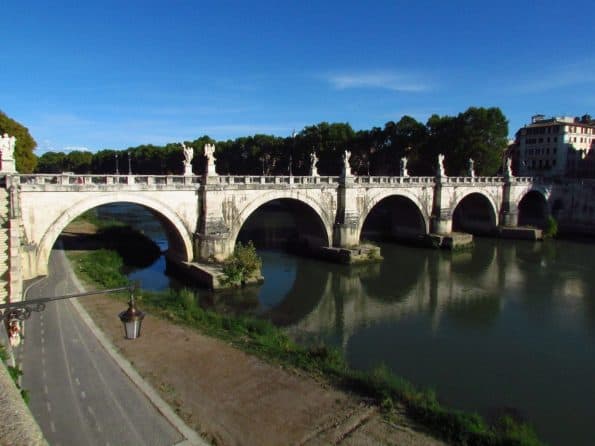 We visited the downtown area on a Saturday evening. We left our hotel near the Vatican and strolled along the Tiber River where street vendors display their wares. After crossing over the river we walked through a residential area before hitting the fashion district. Our destination was the Spanish Steps and the famed Babbington Tea Room. As we drew closer to our destination, the crowds grew thicker. Pedestrians dominate the narrow roadways and automobile traffic all but ceased. 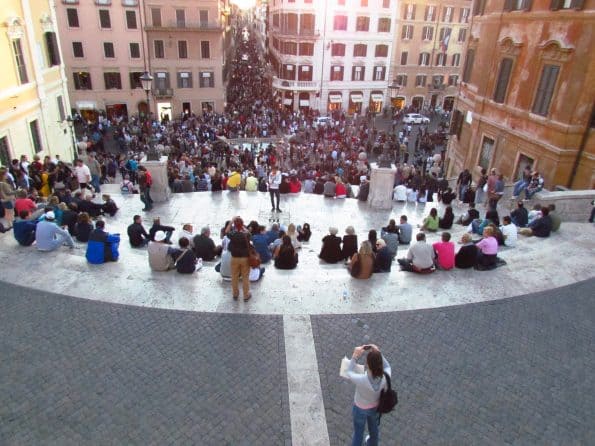 The best way to describe the area around the Spanish Steps is Fifth Avenue meets Bourbon Street. The streets leading to the steps are lined with stores boasting the names of the world’s great fashion designers; Dior, Gucci, Dolce e Gabbana, and La Perla. (We were told that anything we could buy there could be purchased cheaper in the U.S.). It is a place to see and be seen. The downtown area is a beehive of activity. 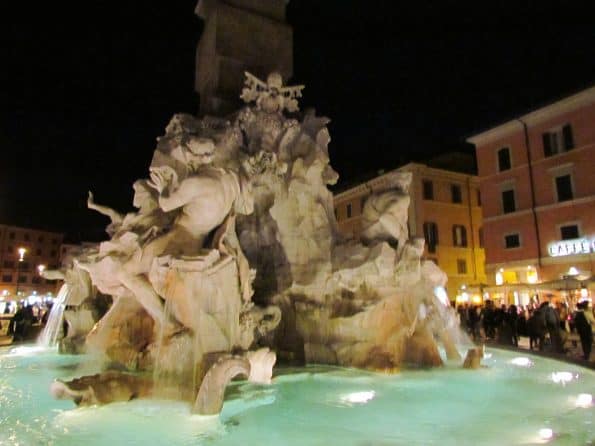 Despite all the action, Rome does not have the rushed feel of cities in the United States. Life happens at a more relaxed pace. People unwind over cappuccino and espresso (almost seems like a contradiction) at outdoor cafes. They stroll along the streets rather than rushing from one place to the next trying to pack one more chore into a hectic day. 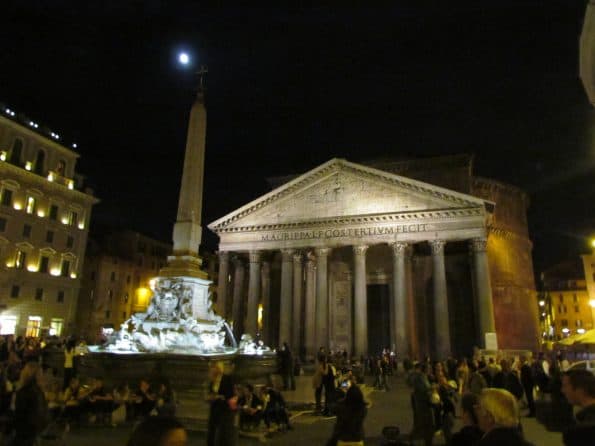 Our tour that evening took us through the downtown area to some of the highlights of “modern” Rome, including Trevi Fountain, the Parliament building, the Pantheon, Piazza Navona, and Campo Dei Fiori. The evening seemed to be an ideal time to tour Rome. In some strange way, twilight washes a romantic hue over the city that allowed this couple to get lost in a way that made us feel the city was ours alone.

The city of “Amore”

Rome is a city of amore. Perhaps that is why we saw so many newlyweds while there and why it is a popular honeymoon destination.

Even my husband, who I would call attentive but not necessarily romantic (in the flowers and hearts way), was struck by cupid’s arrow. While dining at one of the many outdoor trattorias, a gentleman selling roses came up behind me. Bill waved him over and purchased a rose for me. With so many outdoor cafes, cappuccinos with the foam swirled into the shape of a heart, and a flower market on every corner one can’t help but feel a bit amorous. 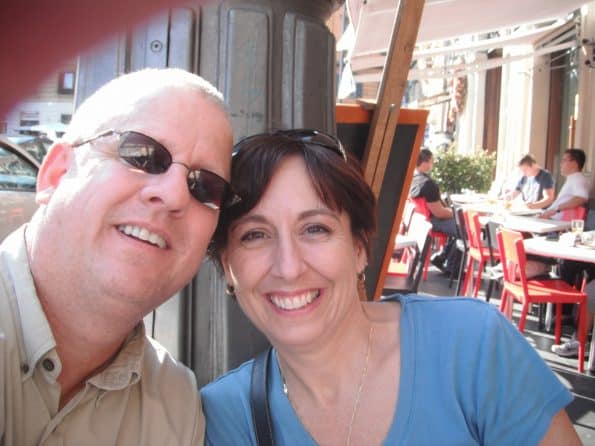 And of course, the food

The Romans are a charming bunch.  They are generally friendly and hospitable. I found this to be true of the innkeepers, the small café owners, and the wait staff at the many trattorias. It is not uncommon for inns and dining establishments to be family-owned and operated. In some cases, the owner is the host, cook, and waitperson. One place we dined near the Vatican, Da Vito e Dina, located on Via Degli Scipioni, the owner was also the “entertainment”.

And of course, no discourse on Rome or Italy would be complete without some talk of food. Of course, the Italian’s take on some of the dishes we enjoy in the States is slightly different. I suppose it retains authenticity.  The pizza is thin-crusted. Lasagna is satisfying but not as heavy as what is served in the US. Fresh bread and olive oil for dipping are served with your meal. It is my understanding that some establishments charge for this but that was not our experience. 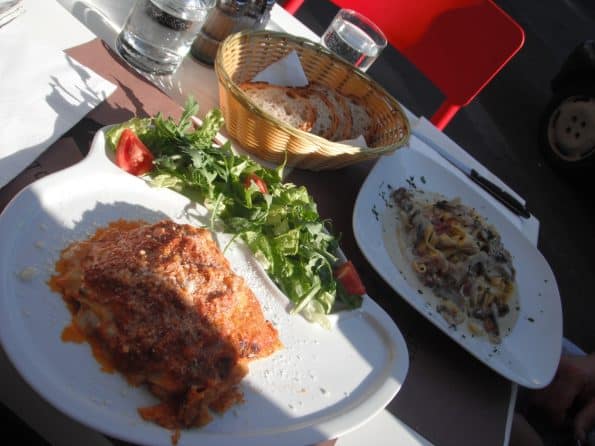 Gelato is a must. Typically, you select your size and your flavors (typically more than one). You can get it served in a cup or a cone. Either way, you will want it topped with whipped cream. Good Italian Gelato is smoother, creamier, and softer than ice cream as we know it.

Breakfast typically consists of a pasty and a cappuccino. If you are looking for a large American breakfast, good luck. There are a few places that serve it but they are hard to come by. Instead, I recommend a chocolate-filled croissant and a cappuccino. I was told that the filling is actually Nutella. Anything filled with Nutella has to be good (just my opinion). 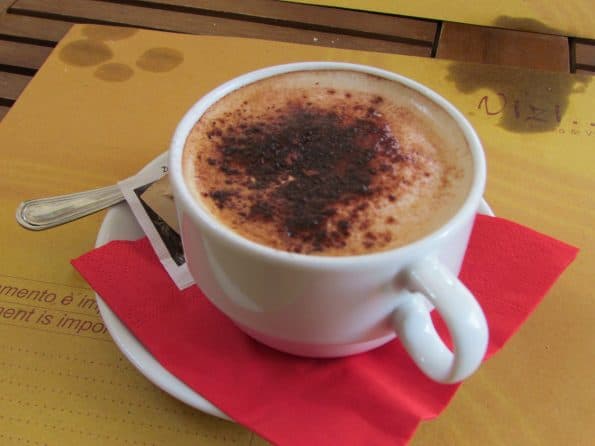 With so much to see and do in Rome, if it is not on your bucket list you should reconsider. We were there for three days which I thought would be plenty but I would recommend nothing less than five days. If you recall I was a reluctant visitor before our trip, now I wish we had stayed longer.
Caio

The best winter getaways in PA to visit now

European destinations for a romantic long-weekend away

7 Happy Valley, PA facts that will make you want to visit now